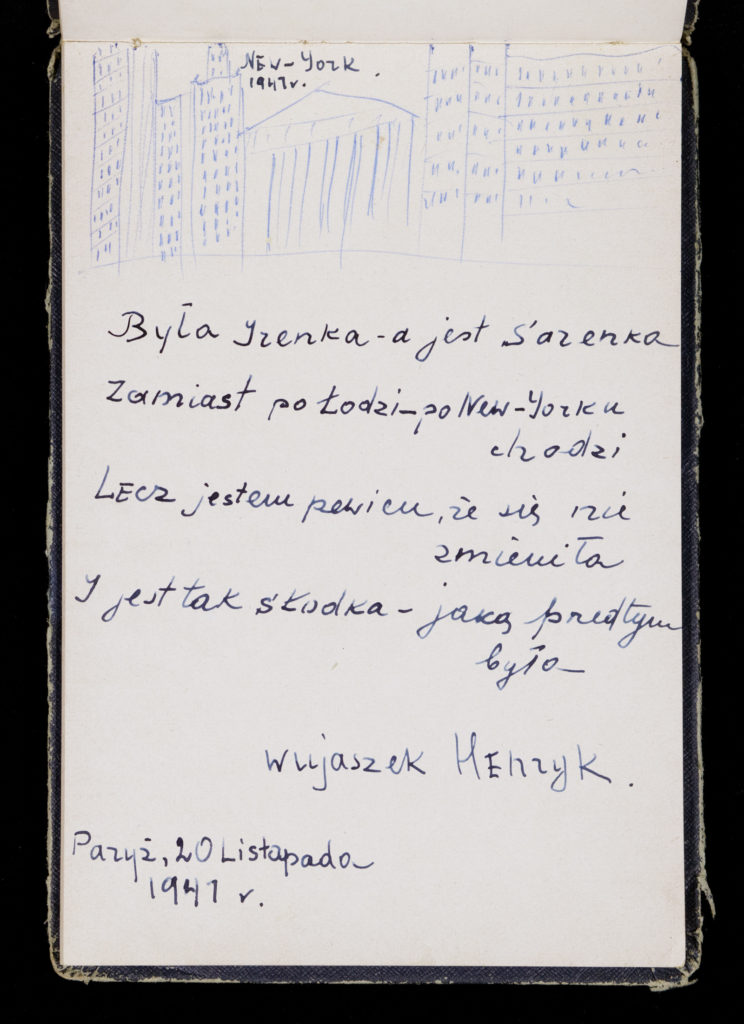 From 1943 to 1947, Maryla Krinski kept a diary in the form of poems about her niece Sarah, daughter of Maryla’s brother Joseph and sister-in-law Rachela. Maryla wrote and preserved her diary through her time in the Vilna Ghetto, Kaiserwald concentration camp, Stutthof concentration camp, on a death march, and after liberation.

The diary is dedicated:
The heart, together with song, I place at your feet . . .
I dedicate this to “Sarenka-Irenka” and her beloved Mother.

Maryla Krinski continued her diary with postwar entries for her niece. The entry pictured on the left is in a different handwriting—“Uncle Henryk” (Maryla’s husband) pictures Sarah walking around New York City:

She was Irenka – she is Sarenka
instead of Lodz – she is walking around New York.
But I am sure that she hasn’t changed,
and is as sweet as she was before.

More Information
When the Vilna Ghetto was first established in 1941, Rachela entrusted her daughter Sarah (born in 1939) to Victoria “Vikcia” Rodziewicz, Sarah’s Polish nanny. Victoria pretended that Sarah was her own child. She eventually took her to her village and cared for her throughout the war. During that time, Sarah was baptized Catholic and given the name Irena. In the diary, Maryla sometimes uses the name Irena/Irenka to refer to her niece.

For saving Sarah and reuniting her with her mother after the war, Victoria Rodziewicz was recognized as “Righteous Among the Nations” at Yad Vashem. A tree was planted for her in 1978.